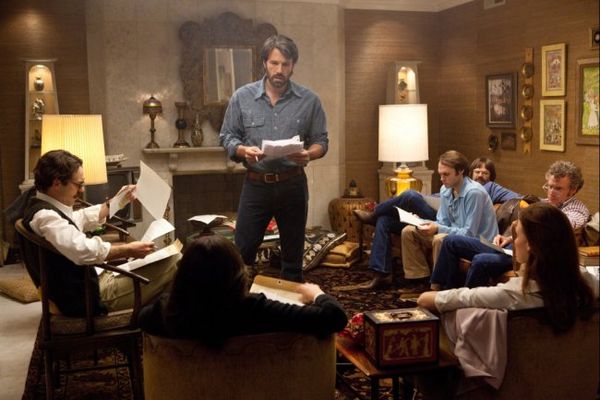 Ben Affleck made quite a splash a few years ago with his directorial debut, “Gone Baby Gone,” which was my favorite movie of 2007. His next project, “The Town,” wasn’t nearly as impressive, and I wondered if directing and starring in a film was too much for him to take on (“Gone Baby Gone” starred his little brother, Casey.) But with “Argo,” Affleck proves that he has figured out how to both act and direct admirably.

Based on real events, “Argo” is the story of six American diplomats stranded in Iran after the takeover of the American Embassy in 1979. The film opens with chilling scenes of the rioters at the Embassy — Americans (and others) stuck inside the walls of the Embassy, frantically shredding documents and calling for military help, which never comes. These scenes are uncannily timely, and I couldn’t help but think of the recent tragedy at Benghazi while I watched them — though I’m sure Affleck and company filmed, edited and finished these scenes long before that incident took place, making the congruence accidental, but no less powerful.

The American diplomats in Iran were held for 444 days before being released, but “Argo” isn’t their story – it’s about six Americans who escaped out the back door and made their way, icognito, to the Canadian Ambassador’s house, where they laid low and tried to figure out what their next move would be. They’re running out of time, because eventually those who stormed the embassy are going to realize there are six people missing, and start hunting for them.

Enter Ben Affleck, who plays a CIA expert at extraction. There are good reasons why none of the simpler strategies for getting them out would work. They can’t disguise them as English teachers or missionaries because there are none of those left in Iran. Journalists are watched too closely. There’s snow on the ground, so pretending to be crop inspectors won’t work. Someone suggests that they sneak them some bicycles and ask them to traverse 300 miles of mountainous terrain into Turkey. Affleck laughs a that idea(“do we even know if they can ride bicycles?”) and then presents an even more laughable idea: they’ll make up a fake movie, pretend the six fugitives are the film crew on a location scouting trip, and sneak them out that way.

It’s a ridiculous idea, and gets more ridiculous as it goes along. In order to add plausibility to the background story, Affleck brings in John Goodman as a costume designer and Alan Arkin as a producer who knows how to get things done in Hollywood, where most everythig is fake anyway. They choose a science fantasy script called “Argo” — a cheap ripoff of “Star Wars,” because this is the late ’70s, when everyone was trying to remake the magic of “Star Wars” — and they even stage a reading with real actors in order to generate some honest-to-goodness publicity for their BS movie. Goodman and Arkin (especially the latter) provide comic relief for a tense and often terribly serious film; Arkin’s acerbic wit cuts through the tension like a newly sharpened knife when he codenames the project “Argo F___ Yourself.”
Aside from Goodman and Arkin (and, of course, Affleck) there aren’t many big names attached to “Argo” (the real movie, not the fake one.) Bryan Cranston, who is suddenly everywhere, plays a CIA bureaucrat, and that guy from Friday Night Lights shows up in a scene or two. But curiously, the crew of fugitives is almost entirely unknown (I recognized Clea Duvall, but just barely) and, cinematically, they aren’t given a lot to do. This movie isn’t going to make stars out of any of them. As a film, it’s almost obsessively devoted to two things: period detail and the mission at hand. The film even opens with the old Warner Brothers logo from the ’70s; one wonders how many hands Affleck had to shake to get that to happen. There are so many newsclips featuring impossibly young versions of Ted Koppel and Peter Jennings that the two should be nominated for Supporting Actor Oscars. Ugly hair, giant mustaches and giant plastic-framed eyeglasses abound.

Affleck makes an interesting choice as a director to stick so close to the mission and not branch out into the edges of the story. The six fugitives are almost as anonymous to us at the end of the movie as they were at the beginning. There is very little character development in “Argo;” Goodman and Arkin play Hollywood stereotypes, and attempts to establish Affleck’s strained family life seem like one of the film’s few missteps. I guess the point this puts across is that it doesn’t really matter who these six Americans are; what matters is that they are Americans in trouble in a hostile country, and Uncle Sam is going to do its darnedest to rescue them. In that vein, “Argo” is one of very few movies made in the last decade to represent CIA operatives and Washington bureaucrats and good, honest, hardworking people. When Affleck is awarded a medal of honor he’ll never receive (because the operation remained classified until the Clinton Administration,) his boss Bryan Cranston delivers one of the best lines in the film: “If we wanted applause, we would’ve joined the circus.” Suddenly CIA spies are unsung heroes once again.

There is already a lot of buzz that “Argo” is the early frontrunner for the Best Picture Oscar next month. I hope that’s not right. This is a fine film, one that I enjoyed and would recommend, but hardly a spectacular one. If anything, “Argo” is overly modest. It’s a little bit funny when it should be, a little bit tense when it ought to be, and it makes no major missteps along the way. The best word to describe it might be “workmanlike.” In that sense, it resembles a successful government operation more than a major artistic triumph. Is that what it takes to win an Oscar these days?