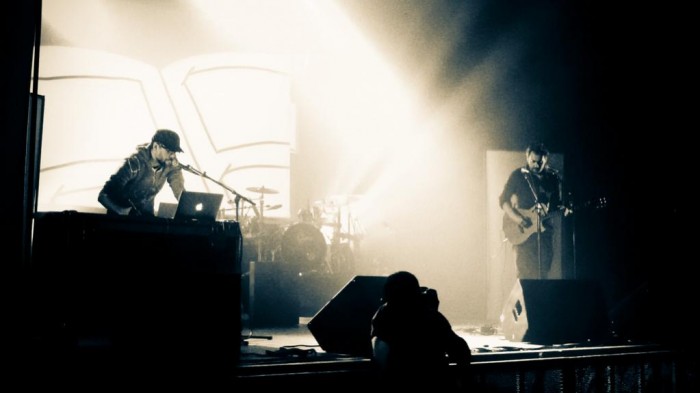 Hailing from Toulouse, France our latest featured artist has taken the digital approach to another level and has managed to pair music with a visual counterpart. Although music is at the heart of what they do, Uniform Motion is less of a traditional band and more of a multimedia art collective.

Live shows feature Renaud Forestié sketching artwork on a tablet that is projected on a screen. The sketch coincides with the song being played by fellow members Andy Richards and Oliver Piotte. It’s fair to say that it’s not just a music performance but also an art show.

Even without visual representation, the music itself stands up on its own, it’s simple melodies and Andy’s soothing vocals really paint a picture. Their latest album, One Frame Per Second is actually written to tell a story about a hero on a quest to save his love from danger. It makes listening to the album all that much more rewarding knowing the songs are meant to play in succession and in entirety.

The Little Knight begins his journey by going back in time, (not literally of course, that would be impossible!) remembering the first encounter with his noble lady, reminded of how they used to pick apples together and play tricks on wizards at Magic School by placing buckets of sludge above the door.

Nostalgia encourages him to go back to his roots and he reminisces about the innocence of childhood, walking the streets he grew up on, reliving the events that forged his character.
This provides him with the strength he needs to embark on his quest.

He sets sail and quickly finds the Forty-Foot man who stole his beloved living a cozy life on an island nearby. As most of you probably know, fighting a man 7 times taller than you is not an easy task. He gets beaten up of course but vows to never give up and swears he we will find a way to free the Princess.

The islanders, who have been oppressed by the giant for centuries, are so impressed by the bravery of the young lad that they start to follow him wherever he goes, treating him like a messiah. We’re all used to seeing crowds of people standing, and staring, and acting silly, but when they follow you around like idiots, you have to do something about it! So he flees to the nearby mountains and camps there for a while.

He comes across the devil during his stay, who offers him weapons and magical power so he can defeat the giant, in exchange for his soul of course. Selling one’s soul to the devil for a sword and some magic beans is a small price to pay for a princess, he thinks, so he swiftly shakes on it.

He returns to the Island to find the giant in chains. The islanders, so inspired by the courage of the Little Knight, worked together to defeat the tall ogre during the Knight’s absence.

The Little Knight is obviously a little pissed off about this. He figures that the devil had probably been aware of this fact when he swapped the weapons and magic for his soul. Bloody devils, you can’t trust any of them!

To add insult to injury, he learns that the Princess had been freed by the giant long before the islanders had defeated him. It appears that he had grown tired of her and put her on a boat, blindfolded, a few days before the young knight had arrived on the island and confronted the giant for the first time. Why on earth did that rude giant not say so in the first place?

Thinking to himself the magic may not be wasted, the Little Knight places the sword in the ground and uses the magic to ensure it doesn’t budge. He attaches some rope to it, and to himself, and magically flies off the find the Princess.

Andy was kind enough to answer a few questions below. Check it out!

TheKnifeFight: Are there any bands/artists that influenced you to become a musician yourself?
Andy Richards: Nirvana, Jeff Buckley, Beck and some Britpop bands I’d prefer not to mention!

TKF: What is the music writing process like for you?
AR: It’s a trial and error process. I put my fingers on the guitar strings and try and get nice sounds to come out of the guitar. At the same time, I sort of mumble stuff on top of the music with my vocal chords. After a while, phrases, or isolated words take form and then I try to structure it all into something song-like. That can take place on a computer screen by recording parts and then copy-pasting bits and pieces here and there, or it can occur organically with the guitar in my hands. Only when the song is finished do I sit back and try and find some meaning in it, or try to determine what it was inspired by.

TKF: What do you enjoy doing when you’re not making music?
AR: Spending time with my family, discovering new places, learning new languages, reading about stuff I had no clue about, playing football (the European version), bike riding.

TKF: What’s next for the band?
AR: We’re going to start working on our fourth album in a few months. We’re going to try and tour more next year as well if we can. We have a few crazy ideas for some web based stuff that I can’t talk about for the moment.
So we’re just going to keep doing what we’re doing for as long we enjoy it.

Show them some love and let them know TKF sent you! They have an awesome flash game you can play on their site as well.

For fans of:
Bon Iver, Iron & Wine, and Sufjan Stevens