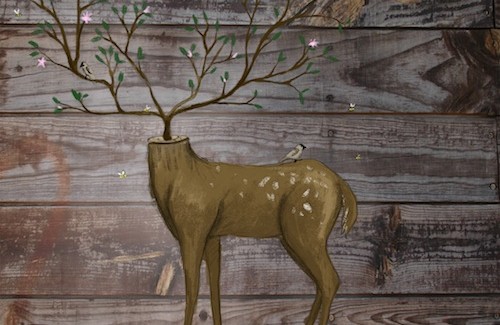 We here at TKF have been on a bit of a folk kick as of late, so this week we decided to cover an up and coming band from Houston, TX to help quench our music thirst!

Harts of Oak have created a blend of folk and indie that many listeners will enjoy. Their album “Birds & Bees” contains songs that are both contemplative and genuine. There’s some heartache sprinkled throughout, but that makes for some good old fashioned drinking music. Grab a glass of your favorite liquid, turn your stereo up, and immerse yourself in the sounds of Harts of Oak. We guarantee you’ll go back for more.

Alex, Matthew, and Atticus were kind enough to take a moment and speak with us about where the name came from and which mediocre superpower they’d rather have.

TheKnifeFight: Where did the name Harts of Oak originate?
Harts of Oak: The name came from a stray thought, in all honesty. There is not much of a story to it. However, the name did give the band some focus. An unoffical logo of a Hart (another name for a deer) was made for us by a friend and it was quickly adopted. It quickly became the image of the band and inspiration for album covers and other nice merchandise. It was a simple, earthy image in the folk spirit and we were happy with it. Incidentally, there is also a Ted Leo and the Pharmacists album named “Hearts of Oak”. Thankfully, our spelling keeps us free from any copyright worries.

TKF: What is the music writing process like for you?
HOO: In the beginning, Harts of Oak was an acoustic folk duo. The songs consisted of two guitars and occasionally a piano part. At that time, we were heavily influenced by folk singers like The Tallest Man on Earth and Bob Dylan as well as anything else we were listening to at the time.. The songs would form from a loose structure one of us had in our head and would then evolve from improvisation and then refinement. The writing process was very free, open, and allowed the songs to evolve naturally. A year later, after taking a break from the writing, Atticus Lopez joined the band on drums and the group then introduced a new dynamic. The addition of a drummer opened the music to the sounds of folk rock and indie rock, inspired by bands like Pavement, Wilco, and The New Year. Even then, the writing process didn’t change much. There would be a loose shell of song brought to a practice session and the song would shape and evolve depending on what direction it took from the full band throwing in their individual ideas. In short, we allow the songs to become what they do without feeling pressured to force it into a particular sound or style. We’ve had some songs turn into something completely unexpected, and it is always for the better

TKF: How would you describe your music to a new listener?
HOO: A blend of folk, indie, and post rock with southern undertones.

TKF: What’s next for you?
HOO: We are focusing mainly on promoting our music and playing shows outside of Texas. Unfortunately, we are all going to college at the end of the summer. Matt to Loyola in New Orleans, Atticus to University of Houston, and Alex to Berklee. However, this is not going to slow us down. We have teamed with Analog Brick Records in San Antonio to produce our first acoustic recordings and release the songs on vinyl. This record is currently in stores in Nashville, Omaha, St. Louis, and in Washington. We are hoping that this will help in spreading our name outside of our home state. We are also looking to get back into the studio before we all leave to record and release a follow up to “Birds and Bees”. Our level of inspiration and excitement has never been higher. We are very proud of the music that we produce and only wish for others to hear it and appreciate it, and if they don’t, we love those people too. If anyone wants to book us in California, holla atcha boi.

TKF: Which mediocre superpower would you rather have? The ability to communicate with only your pet but they only speak a language you don’t currently know (Spanish, German, Japanese) so you have to translate it every time. Or the ability to fly but you can only hover 1 foot off the ground.
HOO: Matthew: I would choose to hover ONLY if it meant I could hover ON things to maximize my levitation level and hover faster than I can walk. Atticus: I suppose hovering would be useful for crossing puddles, and ditches and rivers and whatnot, There are a bunch of rivers in Houston, as everyone knows. Alex: I love cats so I would choose animal communication hands down. In this age of iPhones and other cool stuff, quick translation would not be difficult. Bring on the kitties..

Be sure to check out their latest album “Birds & Bees” and let them know TKF sent you!

The Mind and the Matter – Turn